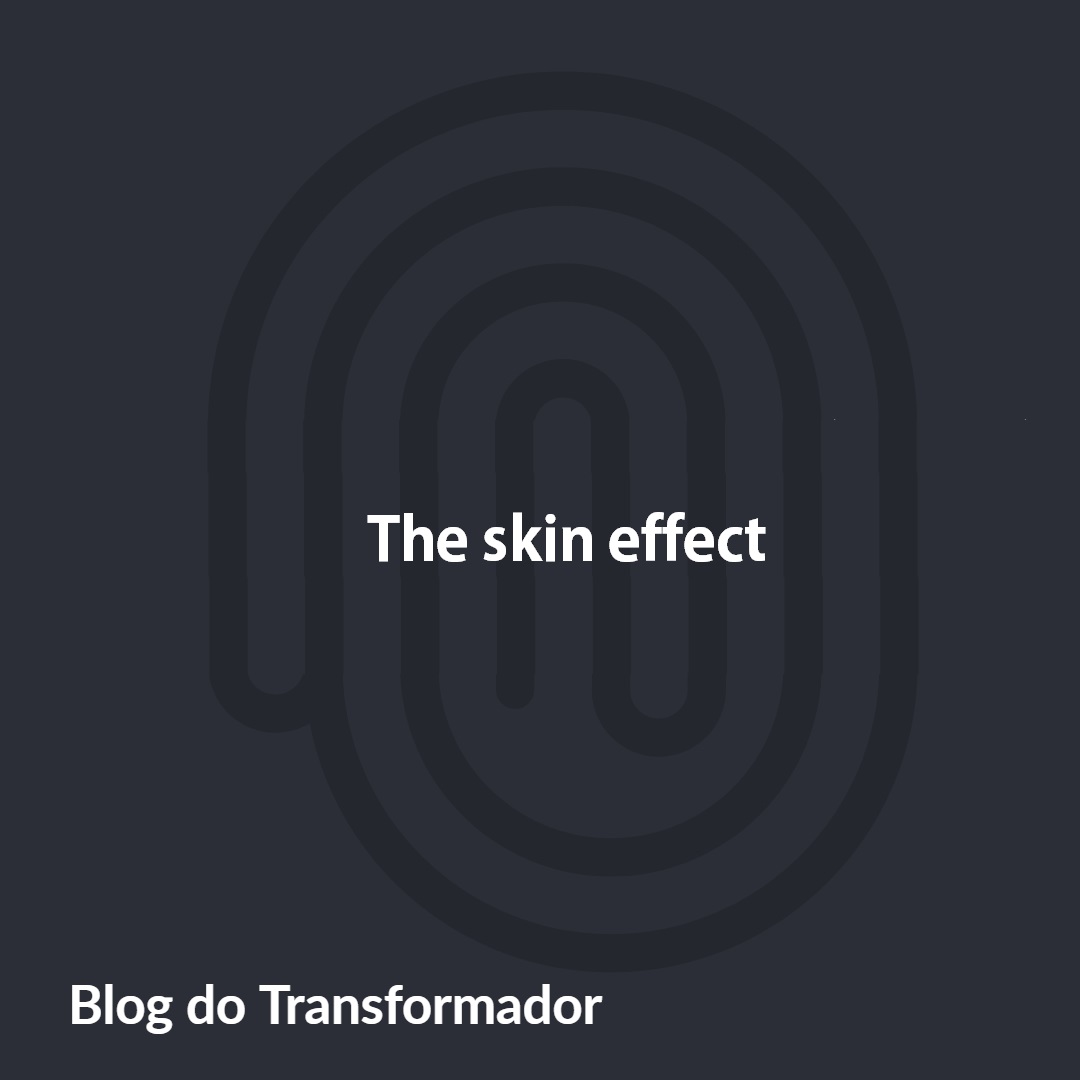 Introduction
The passage of alternating electric current through a conductor makes it intrinsically subject to concentrate on its periphery, to the detriment of traveling through its inner part. It is the so-called Skin effect, or skin effect, since, in its manifestation, the alternating current tends to flow “through the skin” of the conductor. This effect is mistakenly attributed to high frequencies, from hundreds of kHZ.

However, it is not only the frequency value that determines the degree of manifestation of this effect, but also some characteristics of the conductor, such as its geometry, such as radius, for example, and its material composition, such as copper, aluminum or other conductive material. The magnitude that weights the joint action of these influential elements is the so-called penetration depth, d, given by:

Where w represents the angular frequency of the electric current, s is the electrical conductivity of the conducting material and m is its magnetic permeability.

In the case of copper, at 60 Hz, the value of d is about 9 mm. This means that if, for example, a copper conductor, whose circular cross section has a radius close to or greater than 9 mm, will have the skin effect, even at 60 Hz. On the contrary, the smaller the radius of this conductor is than 9 mm, the less the skin effect will be manifested.

With some adaptations, this reasoning can be applied to conductors with other types of cross section. For example rectangular, as in panel buses.

Manifestations and origins
When the skin effect manifests itself, one of its most direct consequences is the reduction of the conductor section, which increases the effective value of the electrical resistance of this conductor, above that predicted value, or even measured, in direct current.

The cause of the skin effect is the mutual interaction between the magnetic field, created by the passing alternating current itself, and the parasitic electric current, induced by this variable magnetic field. Today, the skin effect is well balanced, for several conductor geometries, at industrial frequency, making it possible to evaluate the resistance and impedance sweeps, for example.

Additionally, it is also possible to evaluate the manifestation of the skin effect between nearby conductors. This case, although essentially the skin effect, is known as the proximity effect and has very important consequences for the transformer, along with the skin effect itself.

Exemplifying
Otherwise, let’s look at the elementary case of a continuous winding. Having a section with a radius equal to or greater than 9 mm, the conductor of this winding will present the skin effect, to a greater degree the greater its radius is than 9 mm, causing an increase in its electrical resistance, characterizing part of the so-called additional losses.

These are nothing more than joule losses, caused by eddy currents associated with the skin effect. In any case, the fact that the conductors of each of the turns are naturally close together, to compose the winding, will allow the appearance of the proximity skin effect, almost independently of the dimensions of the section of these conductors.

This combination, in general, will cause, in a continuous winding, the loss of uniformity of the magnetic field, causing a significant non-uniformity of the current density in the turns at the ends of the winding, in addition to the change in the distribution of the stray magnetic field, which also will influence the value of the leakage impedance.

Thus, in power frequency, in general, these changes are not so “tragic”, but will require, in many cases, preventive measures, on the part of the transformer designer.

Some of the most significant measures are the adoption of transposed cables (CTC), for cases of high currents and concern with the additional losses caused by the stray flux, which will induce currents in metallic parts of the transformer, such as screws, bars, rods, beams and even even the tank, causing more “additional” type losses.

Current harmonic
The situation can get out of hand, however, when the transformer supplies loads with significant harmonic current content.

In this case, the additional losses, which are proportional to the square of frequency, kind of skyrocket, requiring transformers with special designs. This is what the North American market adopts, with the famous K factor, whose translation is that a transformer with a certain K factor has an additional loss of up to K times the same additional loss at 60 Hz, without compromising the insulation’s useful life.

The values ​​and K are normalized in 4, 9, 13 and others, and must be adopted according to the harmonic characteristics of the load. Alternatively, a transformer can be designed with a “broken” K-value (2.35, for example).

There is a technique used in Great Britain, which consists of calculating a de-rating factor of an “off-the-shelf” transformer to meet a given load with harmonic content.

For example, a 100 kVA transformer, designed on a 60 Hz basis, will not be able to handle more than, say, 73 kVA, for a given load whose harmonic content points to a de-rating factor of 73 %. In this case, by not requiring a transformer of special design, the costs become relatively low. Otherwise, acceptable.

Hot spot influence
It is worth mentioning that although the presence of harmonics, in general, does not cause such a significant increase in loss, since the higher frequency components tend to have a lower amplitude, it ends up having a devastating influence precisely on the hot spot. This is because the skin effect on harmonic currents causes an excessive increase in the density of eddy currents in the conductors of the turns at the ends of the coils, including the upper part, which is precisely where the hottest point of the winding and, as a whole, of the transformer is. .

In any case, this situation, which is often unavoidable, will require a prompt action from the designer, to avoid the undesirable overheating of the transformer. Such intervention takes place with sophisticated techniques, requiring knowledge of project software and the availability of solutions, such as the aforementioned CTC, among many others.

However, these measures become applicable when the harmonic content of the loads is known. In general, in the case of fixed loads, such as rectifiers and welding machines, for example.

How to deal with all these influences?
But what to do when the harmonic content is impossible to know, because it is variable, even throughout the day?

This is the classic case of transformers for the distribution network, which serve domestic loads with increasingly harmonic content, resulting from the increasing use of showers, switching sources, frequency converters and other “complicated” loads, but with increasing power. larger.

Until regulatory bodies, such as ANEEL in BRAZIL, can start charging for the harmonic pollution generated and thus contribute to an increasingly cleaner network, a long time will pass. Meanwhile, it is convenient for the designer to be prepared for this type of request that has become increasingly present.